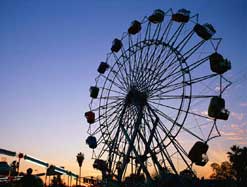 Welcome to this week’s edition of the Carnival of the Capitalists. Today’s show may not be big, but it’s chock full of insight and ideas for the new year.

In my favorite post of the carnival, Why Aren’t There More Private Schools?, Warren Miller asks: “What other industries are there where 94% of the demand for a $10,000+ product goes unmet by new entrants?” What a business opportunity for someone!

Gullyborg’s plan to reform Social Security is simple: “Scrap the code. Eat the loss. Pay out what is owed. Give everyone else a refund.” He expands on this more on his weblog Resistance is futile!

In Keep Government out of Innovation, Jeff Cornwall argues that the Council for Competitiveness offers its National Innovative Initiative proposals, which will do nothing positive for the entrepreneurial economy but will make government larger.

Rawdon Adams looks at the state-of-the-economy at the end of 2004 and includes a graph “reminding stock holders why it’s important to keep an eye on the investment forest, not just its trees” in US Economy: 2004 End Year Health Check.

In Getting Wired, Mad Anthony complains about the depiction of the capitalism in the HBO show “The Wire.”

Martin Lindeskog reviews Zwack Unicum, a unique Hungarian liqueur and discusses its history: “The first signs of political and economic changes brought Peter Zwack back to Hungary to become the first leading capitalist to purchase back a business which had been unlawfully expropriated by the Communist government. In 1990 Peter Zwack resumed production in Hungary of the famous Unicum digestive liqueur according to the original secret family formula.”

Adam Crouch builds on his prior posts about the unorthodox marketing techniques of McDonald’s in Fast-Food Business Strategy with a look at Hardee’s, Burger King and Wendy’s.

In Kyoto Dies, Economies Thrive, Paul Smith explores environmental economics and technology and makes a strong point that: “Strictly speaking there are no natural resources. Yes, nature provides man with lots of stuff. Dirt, rocks, minerals, trees, crude oil, coal, etc. But that stuff amounts to little more than benign pieces of matter until they are combined with human intelligence and given a purpose. You see, the ultimate resource is human creativity, it is the common denominator element present in all ‘non-renewable’ resources.”

According to Frank Scavo, now that Oracle has won the battle to acquire PeopleSoft, a new battle is forming between IBM, Microsoft, and Oracle to decide who will own the technology infrastructure of PeopleSoft customers.

The RFID Weblog notes that all of the big credit card companies have introduced RFID-chipped (contactless) payment systems, and wonder how long it will be before cash becomes obsolete.

In Jane Talks Small Business, Yvonne DiVita explores how to market to women online and why it’s a win-win opportunity for everyone involved.

Brendon Connelly ruminates on BzzAgents and blog disclosures policies in Hi! I’m not a Bzz Agent!

In The Real Losses of Totalitarianism, Brian Gongol explains that capitalism is the only political system not based on exploitation.

Micha Ghertner provides a thought experiment to explore whether or not the free market requires intelligence among its participants in order to meet the needs of the economy in What Does The Free Market Require?

Fake Pundit argues that while politicians say they “may” need to raise Social Security taxes, but if recent history is any indication higher taxes are guaranteed.

In Health Care Reform Collapses Drug Sales, Mike Pechar looks at how the sales of over-the-counter drugs in Germany have dropped now that the government is no longer paying for them. He concludes that “the need for health care is a direct function of who pays for it.

At Small Business Trends, they are running a series on trends predictions for 2005. In Top Technology Trends for 2005, Anita Campbell reviews four technology trends that are likely to impact the small biz market.

In Blog awards need to get the business Wayne Hurlbert argues that the all blog awards shows should include a “best business blog” category.

Barry Ritholtz explains that James Taylor provides a text book example of disintermediation in the music industry, with the release of his first holiday album in JT bypasses the Labels.

Dave Foster reviews the book, They Made America and shares a couple of interesting tidbits. He thinks that the book would be good reading for anyone who is interested in the history of technology and/or the history of business.

First in a series, Mario Jurkovic examines the entrepreneurial history of Gillette.

In Are promised Social Security benefits a real obligation of the US government, or are they not?, Jim Glass points out that “since the election Democrats have been testing both sides of this claim, saying both that: (1) future benefits payments are fully assured so there is no need to shore up SS’s finances [although prefunding them thus is not a cost], and (2) SS’s finances are so bad that benefits are sure to be cut after 2016, so prefunding them at today’s promised levels is a cost the gov’t can’t afford.”

Happy Holidays and thanks to everyone who participated. It wouldn’t be a Carnival without all of you.