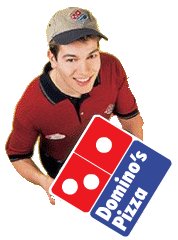 “Domino’s has teamed up with eBay once again for their new, “Anything Goes!” campaign. The scavenger hunt contest on Ebay will accompany Domino’s new promotion which offers any pizza on their menu for $9.99.

“As we continued thinking about value, we thought, why stop at pizza for just $9.99? Why not a DVD player or a computer? Maybe even a car,” Ken Calwell, Domino’s chief marketing officer, said in a statement released yesterday.

Beginning New Year’s Day, contestants can play games and collect clues on the promotion website. The first contestant to dissect the clues and find the item on eBay can buy the item — from Apple iPod Nanos to cars — for $9.99.

eBay and Domino’s have fostered a close relationship over the past few years, with previous successes with their “Back to School” offer in 2003, and “Stay true to your school,” college football campaign.”