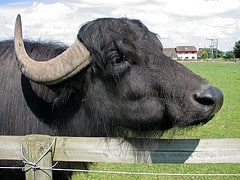 Five or six years ago, David Muller, an entrepreneur who ran a Massachusetts company that pioneered laser eye surgery, was looking for a unique farming opportunity in Vermont when he stumbled upon the notion of milking water buffalo. “They’re easy to keep and cheap to feed,â€? Muller said. “For Vermont agriculture they seemed like a good fit.â€?

He got a $1.25 million loan from the Vermont Economic Development Authority and started milking the animals at his Woodstock farm in 2002. With some help from University of Vermont food scientists, Muller’s company began selling Italian-style mozzarella di buffalo and specialty yogurts made from water buffalo milk. The delicacies retail for about $6.99 for a 6 oz. ball of cheese and $1.79 for a 6 oz. cup of yogurt.

Water buffalo are said to be more docile than typical dairy cows and they live off cheaper food.

“They thrive on mediocre forage,â€? said Kent Underwood, dairy manager for Woodstock Water Buffalo. “They don’t need an energy-dense diet … or much grain. They digest fiber more efficiently than cows.â€?

Also, water buffalo live to be 18 to 25 years old – three-to-five times longer than a dairy cow.

Photo by World of Oddy.

How to Avoid “Seller’s Remorse” When Selling Your Business