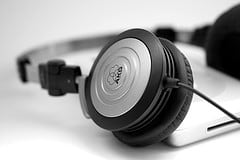 Did you know that if you have 60 minutes of audio material to listen to, you can very easily digest the material in 30 minutes or less? And with practice you can even get it done in less than 15 minutes.

Modern media players can play audio at faster rates than the default, and they’ll automatically adjust the pitch so the voices sound faster but not squeaky. Some players provide this feature via a plug-in. Windows Media Player has this feature built in.

For example, in the latest version of Windows Media Player, click the arrow below “Now Playing.” Then click Enhancements -> Show Play Speed Settings. This will bring up the speed controls that enable you to increase the speed of any files you’re playing.

I prefer to uncheck the “Snap slider to common speeds” box, so I can make finer adjustments. The disadvantage of using speeds like 2.1x or 3.2x is that you’ll get a bit more distortion compared to the snap-to defaults.

You should have no trouble comprehending spoken audio material at 1.4x speed. And after a few minutes you’ll probably be able to handle 2x with no loss of comprehension, which will cut your audio learning down to half the time.

Once you get used to 2x, keep nudging the slider to higher speeds until you can no longer handle the distortion. Then try to increase it again after a few minutes. Of course if there are real-time exercises to do, you can always reduce the speed to normal for those portions.

I think you’ll find as I do that when you listen to audio material at a faster than normal rate, your comprehension and retention of the material improves dramatically.

Instead of getting bogged down in the low level details and examples, you emerge with a clear sense of the big picture. To me it almost feels like I’m downloading ideas directly from the author’s brain.

Custom Clothing: A Low-Cost Way to Promote Your Business

Here’s Why Your Auto Dealership Needs to Offer Loaner Cars