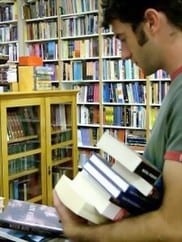 David Lovich visits a library near his home several days a week to look for a job. On Monday, his favorite spot in a busy east Cobb County branch was taken.

At public libraries across the metro area, business is booming, and patrons are visiting the libraries for more than recreational reading. More and more, they’re using the library databases to research business opportunities and find educational scholarships and financial aid, Cobb library director Tamara George said. They often bring their own computers.

“Libraries are a good value during a bad economy,” said George. “People go where things are free.”

In Gwinnett, the county’s libraries are filled every day, said Liz Forster, a spokeswoman for the library system. During November alone, patrons logged on to 90,000, 30-minute computer sessions. In that same period, 4,000 people used the wireless access. Circulation increased by 9 percent this year.

The same is true elsewhere.

While circulation of books, DVDs and CDs is up 4.3 percent this year at Cobb’s central library and 16 branches, computer use has increased 7.5 percent compared with a year ago.

The increase is part of a national trend, said John Szabo, director of the Atlanta-Fulton County public library system: When the going gets tough, people head to the library.