More than any government bailout, it’s people like Wendy Powell who will lift us out of our economic doldrums.

Except it looks like her own government is going to stop her. 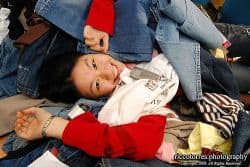 Last fall when Wall Street was in meltdown and the credit system was in a freeze, Powell, a Seattle mom and former software marketer, did the opposite of what the gloom-and-doom forecasts advised. She didn’t hunker down. She plunged into her first business.

It’s called Childish Things, in North Seattle on Holman Road west of Highway 99. It’s a children’s resale boutique, crammed with tiny jeans, mittens, books, smocks, mobiles and about anything else you need if you have a kid.

She buys almost all of it used, then resells it. Business, she says, has been great.

“People like the prices, and they love buying used things because it’s a form of recycling,” Powell said. “This is a green business.”

Not in the federal government’s view it isn’t. On Feb. 10, barring some dramatic change in a new law, Powell’s entire 5,000-item inventory will be considered a “banned hazardous substance” and may have to be chucked.

That’s because the stuff in her store has never been tested for lead. A law passed by Congress and signed by President Bush in August, the Consumer Product Safety Improvement Act, requires all products for kids under age 12 to be tested for lead or pulled from the shelves. Even if it was made before the law passed.