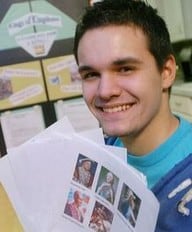 South Elgin High School senior Joe Basile recently won the Chicago Young Inventor’s Challenge for his “King of Kingdoms” game, a board game where Henry VIII, Alexander the Great, King Arthur and others battle over power and territories.

In addition to receiving prizes for his creativity, Basile’s game stood out enough to impress officials at Hasbro, who have put the 17-year-old under contract for two years as an official inventor, charged with inventing products for the toy company to sell.

After testing out the game with his friends and family, it quickly became a favorite. The game is set in the Middle Ages. Five to seven players, set up several sets of cards around a small board that’s considered a dungeon, Basile said.

“What makes the game cool is that when a player attacks another player someone else can interfere,” he said. “You can create alliances.”

Despite his success, Basile says he intends to keep game-making a hobby.