A mother’s love knows no bounds.

That’s no less true for Jennifer Waddell, who’s sacrificed countless hours of sleep in caring for her firstborn, Samuel. 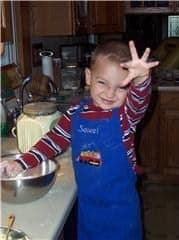 Now 4 years old, her son underwent a 15-hour surgery to remove a dermoid cyst in August 2007; the cyst stretched from his sinuses into the lining of his brain and had eroded most of his nasal tissue.

Waddell spent two sleepless nights praying and watching over her little boy, convinced he would know if she left his side while he recovered from the surgery.

“You’re not sleeping. You’re pacing, going crazy,” she said. “… He’s going to be looking for me, whether he knows it or not.”

Removal of dermoid cysts typically is a simple procedure, but the size and location of this cyst made for a long and risky surgery.

Waddell’s sleep did not increase much over the next several weeks. Samuel needed medication almost every hour as he recovered from the delicate operation, and Waddell’s second son, Jacob, was just 2 months old at the time of Samuel’s operation.

Samuel continues to heal from the surgery and now gives every appearance of being a happy, healthy boy.

But, there is one problem, namely the surgery’s $170,000 price tag, which does not include continued checkups with specialists.

Waddell found a creative solution for that, however, by starting a special-order gourmet desserts business from her home. She makes everything as fresh as possible and enjoys creating children’s cakes.

“I think it’s perfect for her. It’s a natural fit. Her and her husband (Matthew) are both chefs. She can’t really get out of the house and work, with the two boys; I know she misses that environment,” said Cindi Smith Partin, Waddell’s aunt.

Photo from Sweets For Samuel