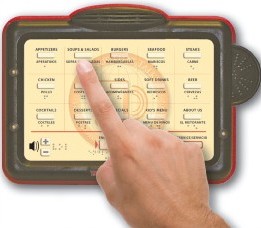 In mid-2006, Susan Perry was inspired by her niece, who suffers from macular degeneration.

Sitting at a restaurant, Perry grabbed a napkin and sketched an idea for a talking menu that would help blind people place orders.

Two years and $600,000 in investments later, her Miami company, Taylannas, produces audible menus that can be found in roughly 30 locally owned restaurants in South Florida as well as two chains, the Original Pancake House and the Lion and the Rose.

Perry’s Menu That Talks allows diners to hear options by pushing buttons–press one, for instance, and a voice reads off dishes, descriptions, and prices. The menu also features flashing lights that can be activated to alert waiters when a customer wants service.

A package of five costs $3,500, offset by a 50% federal tax break for small businesses that provide services to people with disabilities. Her client base could soon become international. Perry, 51, says an upscale Italian cruise line is testing the menu in its dining rooms.