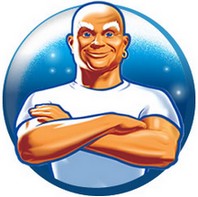 To jump-start plans for a nationwide chain of Mr. Clean Car Wash franchises, P&G in December acquired the franchise assets of Atlanta-based Carnett’s Car Wash, which has 14 locations.

“We need to look for new opportunities to allow us to grow,” says Bruce Brown, P&G’s chief technology officer. “That isn’t limited to things within our current business model.”

Known for exhaustively testing new ideas, Procter & Gamble has been quietly experimenting with service businesses in recent years. Since 2007, it has operated two Mr. Clean Car Washes near its Cincinnati headquarters.

Professional car washing, which rings up about $35 billion in sales a year in the U.S., according to P&G estimates, won out as the company’s first major franchise push. “We want to blow this out to a national network of car washes,” Brown says.

The car-washing business has a handful of competitive advantages, says Nathan Estruth, vice president of P&G’s FutureWorks, which develops new business ventures. It lacks a dominant national chain, aging baby boomers are reluctant to wash cars themselves and more water-strapped communities are pushing professional car cleaning as a conservation measure.