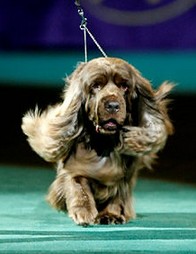 Stump, a floppy-eared, droopy-eyed Sussex spaniel was named The Westminster Kennel Club’s Best in Show – the oldest champ ever.

What can we learn from Stump?

1. Retirement is for cats.

3. Just because it’s never been done, doesn’t mean you shouldn’t try. Stump is the first Sussex spaniel to cop the crown during the 133 years that Westminster has been bestowing it.

4. Good health is important. Stump overcame a near fatal illness in 2004.

Stump proved an old dog can still pull off some new tricks.

Editor Note: I wonder if the new President was watching? He IS looking for a new first pooch.