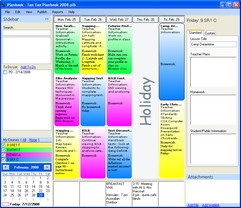 High School science teacher Jeff Hellman is beginning to wonder if he’s bitten off more than he can chew.

What started in the summer of 2006 as a personal quest to toss aside his old-style teacher planning book for a digital version has exploded into something more like a second career.

Google “lesson plan software” and it’s the fourth link to pop up: Planbook by Hellmansoft. It’s selling in the thousands, all over the globe.

“To be honest, I didn’t think it would get this far,” said Hellman, a tall, unassuming 28-year-old in his fifth year of teaching. “I had never written a software program before. But about a month into it, it was like, ‘Maybe this is going to work.’?”

The program has been downloaded at least 50,000 times, Hellman said – though many of those are existing customers checking out upgraded versions. Downloading a trial version is free; the full program costs $30.

Developing the program and subsequent upgrades has been a labor of love, he said, “but I also saw potential.” He won’t say precisely how much he’s netted thus far, but it’s something in the mid- to high five figures.