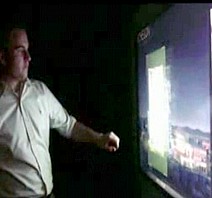 Watch an advertisement on a video screen in a mall, health club or grocery store and there’s a slim – but growing – chance the ad is watching you too.

Small cameras can now be embedded in the screen or hidden around it, tracking who looks at the screen and for how long. The makers of the tracking systems say the software can determine the viewer’s gender, approximate age range and, in some cases, ethnicity – and can change the ads accordingly.

And even if the ads don’t shift based on which people are watching, the technology’s ability to determine the viewers’ demographics is golden for advertisers who want to know how effectively they’re reaching their target audience.

So a video screen might show a motorcycle ad for a group of men, but switch to a minivan ad when women and children join them, said Vicki Rabenou, the chief measurement officer of Tampa, Fla.-based TruMedia Technologies Inc., one of the leaders in developing the technology.