Most business people would scoff at the way Marilyn Johnson runs her business. At Digital Worxx Design in Chicago’s Beverly community, Johnson trains her competition. 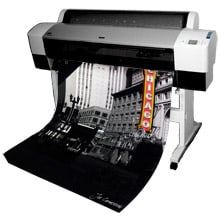 Besides the digital design and printing Johnson does out of her double storefront on 111th Street, the single mother spends time teaching design to other aspiring business owners.

“I thought back to when we were having our struggle,” Johnson said of the first time she considered helping others learn design. “We needed help, and there was no one who wanted to help. If you come in here, we try to help you.”

Johnson’s struggle started about 10 years ago. Pregnant with her son Kion, she left her marriage with no prospects, and nowhere to go.

For years she had written articles for Black Entertainment 411, a now-extinct publication. However, she never learned to use a computer. “I didn’t even know how to save on a disc,” she said.

One friend gave Johnson an apartment for six months, where she moved with her then-teenage daughter, Coushatta Liddell, and newborn son. Another friend connected her with a computer. Armed with little but ambition and knowledge she gained from her previous print work, Johnson began training herself for something big.

Starting slowly at first, Johnson booked a few business card printing jobs. Three years later, she moved off the floor and into an office. A few years ago, that office doubled in size when Digital Worxx moved just south of its first location.