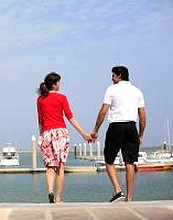 Millions of singles are suddenly jumping on the online dating bandwagon, despite the fact they may not be able to afford to go on as many actual dates these days – or expensive ones, anyway. Online matchmaking services – even those requiring fees to join – have seen an unprecedented increase in memberships in the past three months.

Some of the increase is due to the annual rituals of making New Year’s resolutions and thinking about Valentine’s Day, but experts are attributing most of the rise to the recession itself. People seek companionship during times of crisis, and stress is more bearable when there’s a special someone in your life. Some people may even be thinking that it’s easier to pay the bills when there are two people footing them.

Match.com, which now boasts 15 million members, recently had the best fourth-quarter earnings in its 14-year history, said Mandy Ginsberg, senior vice president. In December alone, member registration jumped 22 percent, which she described as an unusually large increase. Match isn’t the only love company thriving: In November, eHarmony saw a 20 percent increase in users, the biggest spike in its history.

“People are anxious. They’re not going out as much. They’re not spending as much money out on bars [and] restaurants,” she said. “So they want someone to find to kind of help them weather the storm.”