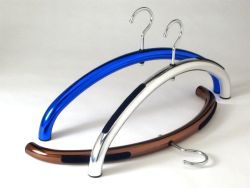 If you own a delicate shirt and it has hung for a while, then you might be familiar with the dimples that are left behind by the hanger. Rick Muller also saw the problem they created and set out to do something about it.

Inspired by an old hanger, he tweaked the actual shape until he was able to come up with the perfect design. From there the materials used to make it fell into place, creating Precision Hangers. The hangers are offered in a variety of metallic colors for style, while their design will leave your clothing crease free.

What was the inspiration for your hangers?

One day I tried on a knit shirt I had not worn in a while and notice these bumps in the shoulder area created by the hanger. After trying to get rid of them I noticed they would not go away. When I looked in the closet more closely I noticed the hangers were either creating dimples or creases in all my clothing. I then searched numerous stores to find hangers that didn’t cause this problem. I discovered only the larger coat hangers prevented dimples in the shirts but they were too big for all my clothes. After a long search and not finding any hangers that solved this problem, I decided to design a hanger that would. I came across an old hanger in our upstate NY home that had a unique bend and realized that was the direction I needed to go. After modifying the shape numerous times I settled on the “D” shaped bend which created an endless horizon which followed the natural shape of the garment. Wanting to take it to another level I researched a variety of materials. After coming across some anodized aluminum tubes in beautiful colors I realized that was the direction I wanted to go. Once I found the felt with an adhesive backing I then realized I had all the pieces I needed and Precision Hangers was born. 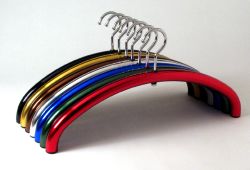 How many colors/styles do they come in?

There are currently two styles of hangers available, one with felt for sweaters and knits to keep them centered on the hanger. The style without felt is for shirts, blouses and jackets that don’t need the felt since they wrap themselves around the hanger and stay centered naturally. Both styles are available in seven colors red, green, blue, silver, copper gold and black. We have other designs planned as well such as hangers with a pant bar, coat hangers and some other special features that will be released at a later date. We are planning a complete series of new hanger designs based on this unique shape.

How long did it take for you to build your business, from the ground up?

The hanger idea had been on my mind for a few years but, I was working on some projects and had other obligations to complete, before I could focus on the hanger. It wasn’t until I found an online sourcing site that I was able to find the tube and hook manufacturers I needed. The process took about 3 months to settle on the design, colors, material and final bend before moving forward with production. Once that was finalized then the plugs, grommets, nuts, packaging materials, logo, stationary, hang tag, business card, sell sheet, web site and other items were sourced ordered and delivered by the time the hooks and tubes were to arrive. In all it took 9 months to complete all the tasks needed to be ready for fabrication and sale to the public.

What other products have you created?

I currently have 3 patents and am awaiting a 4th. My first patent was for an auto open close umbrella, its unique properties were that it was a battery powered open and close system. The design allowed the umbrella to function even if the batteries ran out. It was a little ahead of its time as the motors and batteries were not where they needed to be in order keep the weight down. I believe it still has a future and if all goes well, I hope someday to revive that concept once again.

My second patent was created to solve the hazard created by the gap between passenger trains and the platform. I created a system that allowed for bridging the gap in either an active or passive manner to be installed on the train or the platform. After receiving positive feedback from all the NY Rail Road Systems including the Long Island Rail Road the project was later shelved when the LIRR backed away from both funding and testing of the prototype as was originally planned by the President of the system.

The third patent is the Design Patent for the hanger but I am now awaiting a utility patent on the same design. If awarded it will mean this new concept is a fundamental advancement in hanger design.

While your hangers are relatively young, as you just launched them late last year, RJM Studio has been around for many years. How has it evolved since its launch in the 80’s?

RJM Studio was started in the mid 80’s when I was a Commercial Still Life Photographer and lasted about 15 years before market forces changed the business.Â  After that I worked for a variety of companies doing photography and working as a rep for others. My goal was to get to a place where I could develop one of my products and get back to having my own business. The Umbrella project met with a lot of resistance do to cost and heavy weight of the prototype. At the time most people were going with disposable umbrellas or cheap designs. Many manufacturers were reluctant to develop a high end umbrella.

The Rail Road product was met with tremendous enthusiasm at first but once the Long Island Rail Road backed away from testing it, there was nowhere to go with it. I realized at that time it was going to be essential to find a product that I could finance myself, that was when I began to focus on the hanger. It took some time to find all the pieces but once they started to fall into place everything moved along quickly which brings me to where I am today.

Have you always wanted to be an entrepreneur?

It has always been an ability of mine to solve problems and photography was a perfect outlet for that energy. Being a photographer for the most part is an entrepreneurial pursuit by its nature so after working as an assistant for a few years in NYC the natural progression is to strike out on your own. I grew up in the Catskill Mountain area of NY where I spent most of my time outdoors so being put into an office cubicle went against my very nature. My restless mind was not one that could be kept doing the same thing day in and day out, I needed to be challenged. When I was shooting catalogs I would go from shooting shiny metal to glass to clothing all of which required different solutions to bring out unique characteristics of the product so that problem solving was the driving force. It didn’t hurt that being freelance offered a great deal of flexibility as well.

What goals would you like to accomplish with Precision Hangers before you reach your 1 year anniversary?

My objective is to sell most of my inventory by selling through my site and into a few mid-sized retail stores. Once that is complete I can do a second run to expand the line to include the pant bar and a special feature that I feel will truly set this line apart from all other hangers on the market.

What are some of your long-term goals?

The ultimate goal of Precision Hangers is to become the most sophisticated clothing preservations system on the market. We will create a full line of unique hangers that work together to preserve all clothes like never before. I believe things can always be done better so we won’t create a product unless it is an improvement over what is currently available in the market. We don’t want to re-do what has already been done we want to make a vast improvements over what has already been done.

What recommendations do you have for new entrepreneurs, just getting started with their own business?

Being an entrepreneur is not an easy task and it takes time, patience, discipline and above all belief in yourself and your product. It can be difficult to find support from people who don’t understand the motivation or who don’t have an entrepreneurial mindset, I experienced that myself from my own family.

Another key element is to listen to all those around you even the naysayers as each may have some critical element that may prove invaluable down the road. Don’t be too quick to dismiss negative feedback, use it to help develop or improve your product or focus on an area that you had not thought of before.

Start small by developing a prototype and taking it around to show potential customers and use their feedback to make what may be critical changes to your product. I listen to everyone I can get see the product, weigh what advice they have to give and come to my own decision, often times it is somewhere in the middle but, follow your instincts.

Finally, unless you are independently wealthy try to start your project on a part time basis so there is not as much pressure to have success immediately. It may take one to five years before your product reaches its full potential or even gains acknowledgment in the marketplace so you will be better off if you have an income to keep your stress level down and keep your dream alive.

7 Tips for Analysts from Stanislav Kondrashov of TELF AG