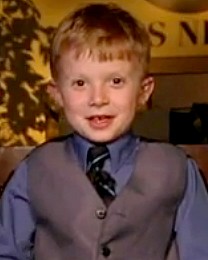 Sometimes you have to start early to get ahead.

Rockford’s Tanner Leuellen, 8, has started earlier than most.

After passing out homemade business cards and looking for a position as an “Apprentice Creator” at the Rockford Chamber of Commerce Manufacturing Expo last week, the grade-schooler has spent spring break doing interviews.

CNN featured him; so has CBS. But with upcoming appearances on the “The Ellen DeGeneres Show” and “The Bonnie Hunt Show,” it seems he has walked away with more talk-show gigs than job offers.

On “The Early Show” you said you’ve received a job offer. What was it?

It was for Good Feet [in Rockford]. They sell shoes; I’m going to figure out what sells a shoe. And they’re going to walk me through everything and show me the stuff they do for their employees. … That was my only job offer.