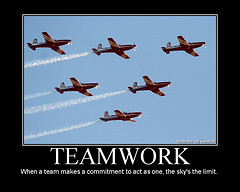 Co-Working is the idea of renting a desk and limited space amongst others for around $250 a month for your working needs. Past studies show that co-working decreased in the first few months of previous recessions but then rapidly picked up as the recession continued. It is already prove true once again during our current recession.

With unemployment so high, people need jobs, they are less picky about where they work and what the working conditions are. Some people even say that they do their best work amongst strangers around them.

An informal survey of owners of co-working facilities conducted by Emergent Research last year found two-thirds were “very optimistic” about their prospects in the recession. They said in a tough economy, small businesses would prefer their flexible daily or monthly leases over fixed two- to three-year commercial leases, and that networking opportunities are more valuable than ever.

What are your thoughts and ideas on co-working today?