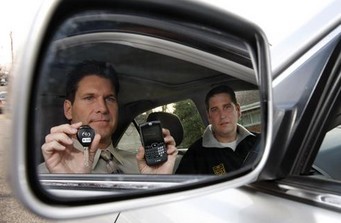 Fred Wenz, a deliveryman for UPS for 23 years, has turned his frustration with drivers on cellphones into a safety business venture.

While on a run a few years ago, he came up with the idea for a device that blocks cell signals around a driver’s seat. It’s modeled on ignition locks that make a convicted drunken driver blow into an alcohol tester before the car will run.

“I witness it every day on the road, and I just thought, ‘There has to be a way that you can prevent this electronically,’ ” says Wenz, 40.

The device blocks signals to and from cellphones for a 5-foot radius, effectively the space around a driver’s seat. It also can be set to be effective only on a secondary key, such as one a parent gives a teen.

Photo by The Cincinnati Enquirer.