Being a hockey mom, however, she was curious about a new hockey development company in the Saint John area that was profiled in this column last December called Ozone Hockey. 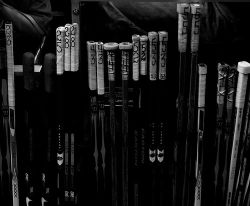 When she Googled the company name, however, she stumbled across a website that piqued her interest. The website was about a new process that uses ozone gas to rapidly oxidize odour-producing bacteria from sports gear.

Flecknell knew only too well the smell that comes from used hockey gear. Her daughter used to play and her 17-year-old son still does, this year for the Saint John Phoenix Flames in the midget C division.

When she read about this ozone-using system, she thought it might be a side business for her family.

“To be honest, it’s the smell that got me interested,” said Flecknell, who opened Sani Clean in January. “You’re at the rink and all the kids are coming out of the dressing room and all the parents are like, ‘Oh, the smell.’ ”

Flecknell got her system from a Quebec company. Sports gear is placed inside the machine, which is then filled with ozone. The gas rapidly oxidizes the odour-producing bacteria, safely deodorizing and disinfecting the gear, before safely converting back into oxygen. The gear is then fogged with tea tree oil to attack any remaining bacteria.

“It’s a dry sanitizing process so the gear is ready to go in 20 minutes,” she said.