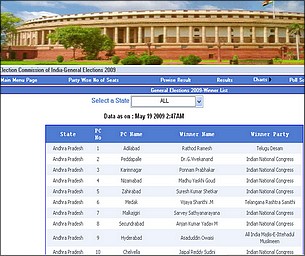 The day before India’s Lok Sabha elections, the country’s election commission made a new Web site live to provide election results in real-time. The commisson overbuilt the site, so it thought, readying it for almost 3,000 hits per second–that’s 80.6 billion hits in a single 8-hour day.

The six-day voting process was supposed to culminate on Saturday, May 16, but the servers were crashing, and updating stopped. TV channels and newspapers that had been counting on the site’s accuracy were flailing. The servers, which live at India’s National Informatics Centre, couldn’t be fixed until early Sunday morning. The final hit-count: 8.64 trillion hits in just eight hours, far more than top-visited sites like Google, that gets only 5,300 visits per second, or 460 million per day.

Editor’s note: I include this post as a demonstration of the power of the Internet.