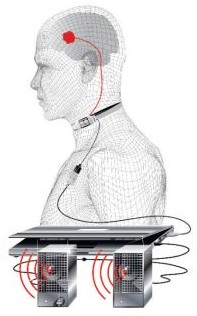 When Michael Callahan was 17, he lost his short-term memory when he hit his head in a skateboarding accident. “The neural pathways were all wrong,” he recalls.

Within weeks, he was back to normal, but the incident left him thinking, how could he help people who had permanently lost abilities that most of us take for granted?

Five years later, he came up with the Audeo, a tiny device that detects electrical activity between the brain and vocal cords and turns it into audible speech.

When we speak, three basic things happen: the lungs deliver air, the vocal cords vibrate to create sound, and the mouth moves.

The Audeo helps people for whom at least one of the three processes malfunctions due to ALS, traumatic brain injury or other problems – those whose brains and vocal cords are intact but whose impaired motor skills prevent them from moving their lungs and mouth.

Here’s how it works: Three pill-size electrodes on the throat pick up electrical signals generated between the brain and the vocal cords. A processor in the device then filters and amplifies the signals and sends them to an adjacent PC, where software decodes them and turns them into words spoken through the PC’s speakers.