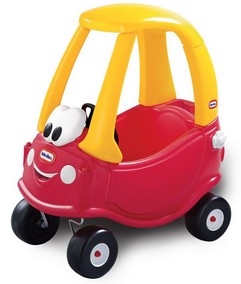 The middle of June might seem like an odd time to release sales figures, but we’ve just gotten word that previous reports announcing America’s best-selling vehicle may have been all wrong.

While the Ford F-Series pickup has topped the vehicle sales list for as long as we can remember, the car crown has shifted back-and-forth from the Taurus to the Accord to the Camry for the past few decades.

A relatively unlikely American carmaker is now laying claim to that title. Little Tikes Co. of Hudson, Ohio has released sales figures for its iconic Cozy Coupe showing that it has outsold all of those four-door family sedans throughout its 30-year production run. That’s right, the red plastic coupe with the yellow top turns 30 this year, and last year alone the company moved 457,000 of them, handily besting the Toyota Camry and Honda Accord.

While the Cozy Coupe you’re buying for your kids today might look just like the one you remember unwrapping yourself 30 years ago, it has actually undergone three revisions in that time.

The original Cozy Coupe was actually penned by former Chrysler designer, Jim Mariol, in 1979. It kicked off a riding toy craze that hasn’t subsided. Rather than resting on their laurels, however, Little Tikes has taken the 30th anniversary of America’s favorite ride-on car as a great opportunity for a makeover.

The 2009 model gets Pixar-like eyes up front, a floorboard to keep tiny feet from getting caught under the seat, and a handle and cupholders for parents built into the roof.