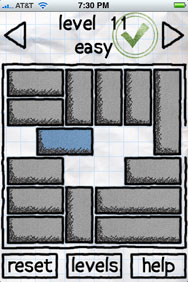 Have you ever wondered what goes into making, marketing, and selling an iPhone app? I have. PCWorld has an interview with Joel Rosenberg, the author of an addictive puzzle game for the iPhone called Blocked.

PC World: Let’s get the big question out of the way. Will you be able to retire based off the success of your first game?

Joel Rosenberg: Although I really enjoyed developing and selling my first iPhone game, I’m happy where I am right now.

PCW: But you have had some success…

JR: Well, when I was number one for that nice little period last month, I was seeing 10,000 to 15,000 downloads a day. But even at number ten they dropped off significantly, and two months ago I was selling 5 to 15 units a day, so it’s hard to make predictions.

PCW: That’s not shabby at all. How much of that 99-cent sale do you get?

JR: Apple gives developers a 70 percent cut of the sales across the board, so about 69 cents.