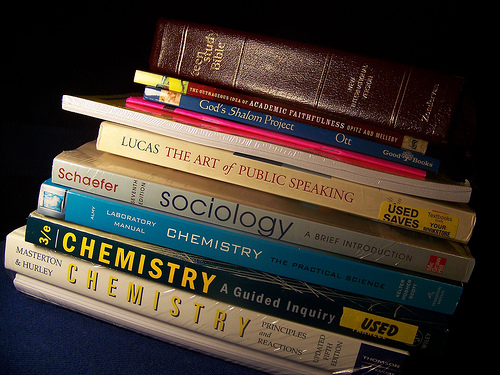 Chegg is a textbook rental website, and they began renting boks before it actually owned any!

When an order came in, its employees would surf the Web to find a cheap copy. They would buy the book using Mr. Rashid’s American Express card and have it shipped to the student. Eventually, Chegg automated the system.

But as the orders multiplied, Mr. Rashid said, so did the traffic on his credit card, leading American Express to suspect fraud and threaten to suspend the account. He said he persuaded American Express not only to keep the card active, but also to issue a couple of dozen more so Chegg could spread out the orders.

There is plenty of secret sauce to Chegg’s business, including logistics and software to determine the pricing and sourcing of books, as well as how many times a given book can be rented. The savings can vary from book to book. A macroeconomics textbook that retails for $122 was available on Chegg for $65 for one semester; an organic chemistry title retailing for $123 was offered for $33. (Round-trip shipping can add $4 to a book.)

Those kinds of savings are turning students into fans, Mr. Safka said. “Word of mouth,” he said, “has put wind in the company’s sails.”

Now that is how to boostrap a company. You could do something similar in almost any niche.