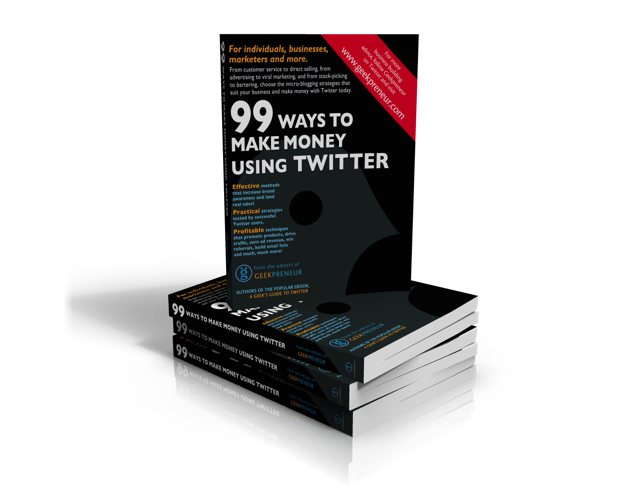 Since winning the SXSW blog award in 2007, Twitter’s growth has been phenomenal. From 500,000 users in early 2008, the site now hosts around 10 million microbloggers, and is used by enthusiasts, professionals and businesses alike.

99 Ways To Make Money Using Twitter was written by the editors of Geekpreneur. What started off as a introduction to Twitter eBook has turned into a 376 page reference guide. It sounds great:

The challenge in writing and researching a Twitter business book is to look at all the strategies, methods, and ways of making money on Twitter, and to bring them together into a book that is current, yet filled with case studies that will not go out of date. The methods range from one extreme to the other. We found authors who were selling their books with Twitter, and writers who were publishing their books on Twitter. We came across plenty of large firms using Twitter to improve their customer service, and one Twitter entrepreneur who was making almost $1500 a month helping CSS programmers in his spare time on Twitter. We found a bunch of different ways of inserting ads into a Twitter page — some more obtrusive than others — and users who were offering Twitter-based translation services, job listings, garage sales, retail outlets, giveaways, affiliate links, contests, directories, craft products and a whole bunch more.

Your Online Business: Real-World Tips to Help It Grow