Direct sales, like Avon, Herbalife and Pampered Chef, are tried-and-true opportunities that existed long before the Internet. 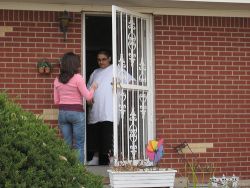 And right now, they’re experiencing a resurgence in interest from the public. Pampered Chef, a company in Addison, Ill. that sells kitchen tools, has seen an 8 percent increase in the first half of 2009, says Andrea Rossell, a public relations manager.

“We do know that in recessionary moments people are looking for opportunities to supplement their income and they take an interest in direct sales,” she says.

Kits to get started selling Pampered Chef merchandise cost between $65 and $155. The company says that income potential averages about $850 a month for independent contractors who schedule two shows per week to sell the merchandise, Rossell says.

The problem with direct selling is that beginners often have high hopes, unrealistic expectations and few selling skills. Finding new customers to buy products takes constant, energetic networking and prospecting. A common mistake is that these sell-from-home reps don’t market themselves in order to attract potential customers, Johnson says. The result: they use the discount they receive from the company to buy products for themselves, instead of for resale.