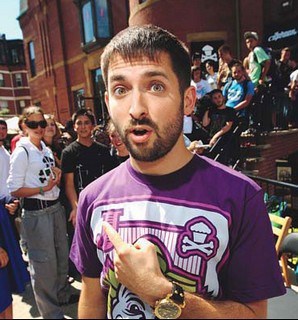 It started with a nickname. Every day, Johnny Earle would go to work at the Braintree, Massachusetts, music emporium Newbury Comics, and every day his colleagues would call him something different. “Hey, Johnny Appleseed; Johnny Pancakes; Johnny Cupcakes!” Somehow, Cupcakes stuck.

That was back in 2000, when Earle was ordering T-shirts for his metal band, On Broken Wings. On a lark, he got a Johnny Cupcakes shirt printed up. His colleagues hooted, and store customers asked, “Where did you get that? Is it a bakery? An adult movie store?”

Soon, Earle was selling half a dozen shirts a day from the trunk of his ’89 Camry. He bought cheap shirts from a local silk-screen shop where he once worked. Shirts plus printing cost $4 or $5, and Earle charged $8 to $10.

He created new designs that played off pop culture — the Statue of Liberty lofting a cupcake; a cupcake and crossbones — and marketed them to customers whose e-mail addresses he had collected.

On Broken Wings signed with a record label and toured the U.S. After concerts, Earle sold his shirts — wrinkled and reeking of gas fumes from the band’s van — out of a suitcase. In cities they visited, he stopped by boutiques; a few bit.

Meanwhile, customers who were also in bands dressed Ã  la Cupcake onstage and in videos. A cult following grew.

Continue Reading: “How To Start A T-Shirt Company”