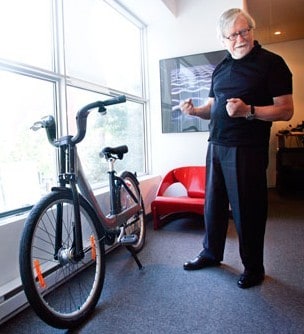 Reclining in his Peel St. office in an ergonomic chair of his own design, wearing a sleek black golf shirt with matching rims and watchband – Michel Dallaire is Bixi personified.

And yet, says the Montreal industrial designer who dreamed up the Bixi system, he’s been wearing the same type of shoe for 23 years.

Dallaire is full of surprises. In fact, he’s staked his whole career on the element of surprise, he said.

Dallaire’s office is littered with tokens of success, including the torch he designed for the 1976 Olympics – he refused a gold-plated version – and a row of futuristic seating commissioned for the University of Montreal.

In his 43-year career, Dallaire has designed coffee urns, briefcases, swimming pools and subway cars, always looking for that “wow” or frisson.

But the bike share system he conceived last year is eliciting more than just shivers.

Bixi received rave reviews from all sides after its launch this spring and is being eyeballed by a growing number of cities, including Vancouver, Seattle, Minneapolis, Toronto, Ottawa, Gatineau and New York. The concept looks poised to sweep the continent.

Photo by The Gazette.