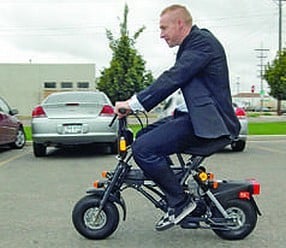 Dustin Staeffler, 28, will fold up the motorized scooter into a cube, lift its 63-pound frame into your trunk and drive your car home, with you in it, for $22 within seven miles of an establishment that serves alcohol.

“A lot of people don’t believe me yet because it’s so new,”he said. “They haven’t seen enough of it, so they think I’m joking around.”

Staeffler recently started his business, “Wheel Man,” to drive people who had been drinking home in their own cars, then scoot off on the waist-high motorized scooter to find another customer. The idea is not a new one – similar businesses exist in many U.S. cities as well as internationally – but is the first of its kind in the Bismarck area.