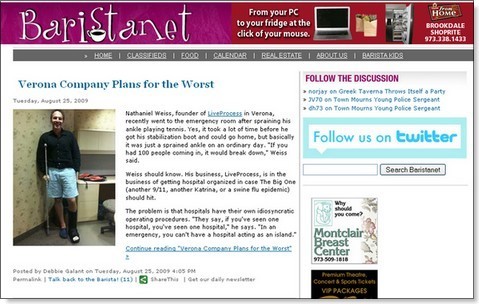 Outside the local train station, the Maplewood Civic Association maintains a bulletin board plastered with news of jazz festivals and yoga classes for this small, affluent New Jersey town. One day last winter, an unassuming new flyer appeared, nestled between ones hawking a fish tank and a drum set, titled, “Introducing the Local.” The flyer describes the Local as “a community Web site by you and for these communities, mentored by The New York Times.”

Why is a media titan like The New York Times Co. — already stretched thin by the challenges of a faltering business model — dabbling in community news, traditionally the bottom of the journalistic food chain? Call it the Google Effect. The search giant’s model, described by author John Battelle as “a billion dollars, one nickel at a time,” is a perfect description of how media companies hope to take tiny sources of local revenue and roll them up into big money.

Hyperlocal sites — covering cities, towns, or just a neighborhood — can deliver precision-targeted advertising to local and global businesses. As the once-exponential growth rate for most Internet advertising in the United States grinds to a halt, the online local-advertising market is projected to grow 5.4% in 2009 to $13.3 billion, according to media research firm Borrell Associates.

As it happens, one of the architects of Google’s success, former head of advertising Tim Armstrong, founded a community-news site called Patch that intends to collect those nickels. Armstrong, in his new role as the CEO of AOL, acquired Patch in one of his first moves. And where, of all places, has Patch set up shop? Maplewood.