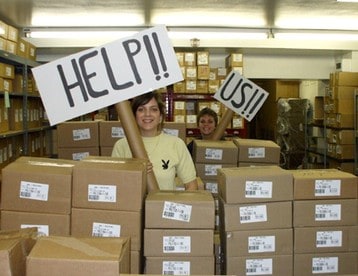 Kickstarter, a Web site that helps connect aspiring artists with patrons who finance their projects and often receive some tangible memento in return.

But it’s not just artists who are using the platform. Some small businesses and entrepreneurs see it as a way to raise money to supplement and support their business in new ways.

One of Kickstarter’s earliest success stories was Polyvinyl Record, an indie record label that has released albums by of Montreal and Asobi Seksu.

Polyvinyl recently used the service to offload extra albums that were piling up, said Matt Lunsford, co-president of the company. “We had a lot of overstock from our worldwide distributors who weren’t selling as much as they once were,” he said.

Faced with either paying exorbitant storage costs to house the 10,000 albums crammed into the company’s warehouse or destroying them, Mr. Lunsford decided to try to clear the surplus inventory through Kickstarter, which he had heard about from one of its co-founders, Yancey Strickler, who was also a friend.

“We thought, why don’t we find a way to get these records out to people at a low cost instead of destroy them?” said Mr. Lunsford.

The company structured its reward packages for donors to resemble a clearance sale – for a $5 payment, patrons received a concert DVD; a payment of $15 or more would get five albums and a concert DVD. Mr. Lunsford said the company originally set a goal of raising $1,000, figuring that would sell enough of the backlogged albums to clear out the company’s stockroom.

Since then, Polyvinyl has been using Kickstarter as a way to test whether there is sizable audience interest in an album before making copies of it.

How to Get the Most out of Digital Advertising

5 Reasons Your Nonprofit Should Adopt a Digital Strategy

How to Get the Most out of Digital Advertising

5 Reasons Your Nonprofit Should Adopt a Digital Strategy