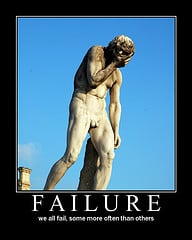 Many people who are contemplating quitting their job to become self employed make the mistake of only talking to those who have succeeded in self employment. Yes these are good people to talk to and get advice from, but you should also talk to people who have failed at self employment before making your final decision, as suggested on Small Business Labs.

The reason we want to hear from those who have made it in self employment is because we want to hear the brighter side of the spectrum, we want to hear their success story and believe that we will have the same result that they did. That doesn’t always happen, what about the darker side of the spectrum, what about those who did not make it? Are you prepared if that should happen to you? You need to hear both sides of the story before deciding to quit your day job and go at it alone, that way if the worse should happen, at least you will be somewhat prepared. You won’t be caught off guard thinking to yourself “I don’t understand, it worked for Bob why didn’t it work for me?”

Recent surveys show results that prove small business ownership doesn’t come with huge high risk’s, but the reason for this is because most of these surveys are done on businesses that of course are still in business, they lack information from those who have failed, and lets face it… there have been many that have failed. I’m sure if the surveys included their information then the results would be different.

So if you are considering small business ownership, entrepreneurship or self-employment keep survivor bias in mind as you read surveys and talk to people. Also, make sure to talk to folks that have failed. They will give you important and likely different perspectives than people that have succeeded.