A new money making opportunity that claims to â€œMulti-level market the Internetâ€ could be nothing more than a pyramid scheme warns Better Business Bureau. 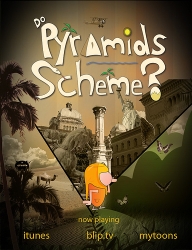 An investigation by BBB shows that iJango â€“ a new self-described multi-level marketing company â€“ is aggressively seeking representatives for a product that has no track record. Consumers are paying hundreds of dollars in upfront fees based on the claim that they can earn money by recruiting others to do the same â€“ a red flag for pyramid schemes.

Multi-level marketing is one form of compensation often employed by direct selling companies, whereby sales agents recruit other sales agents and receive a cut of their sales for products. Pyramid schemes, which are illegal, promise that participants can make money primarily by recruiting people who then pay for the opportunity to recruit more people. The money is then filtered up through the pyramid.

â€œMillions of people earn honest money by selling products through multi-level marketing; however, some money making opportunities blur the lines between MLM and pyramid schemes,â€ said Randall Hoth, Wisconsin BBB president/CEO. â€œiJango is making big promises about its money making potential, but based on our investigation, BBB believes the potential to generate revenue may primarily depend on the ability of participants to recruit additional representatives.â€

More than 3,400 people nationwide have contacted BBB to check out Austin, TX-based iJango since August 1, 2009. iJango is being marketed heavily on Web sites, including YouTube and Twitter, through spam e-mail campaigns and at in-person sales presentations across the country. In-person sales presentations have been held in many cities including Phoenix and Plano, Texas, with people having been contacted by e-mail and encouraged to take advantage of the opportunity.

Photo by Visions Of Domino