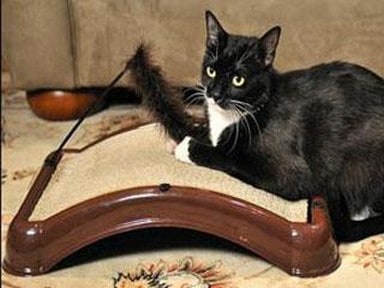 Necessity is the mother of invention. We’ve all heard that old saw. Maybe half believed it, maybe not.

Evidence of its truth is at hand: in the form of Michael Diep.

The cat-loving business consultant couldn’t face taking his brother’s two cats to the vet every couple of weeks for pedicures in order to prevent shred-jobs on the expensive furniture while he was presiding as pet sitter.

The very idea of those trips was enough to bring a guy to his knees. There was, of course, the time factor. There was also the much more compelling hide-and-hiss factor of two felines really not interested in having an outing in a crate.

And so Diep built a scratching post with extra-special nail-filing capability. The rest, as they say, is history. He was tapped in 2007 by PBS’ popular Everyday Edisons as one of its golden inventors. Now his invention, redesigned, polished and refined, is hitting pet stores and select Walmarts, and is being sold online.

And in a few weeks, it will be one of those infomercial items you’ll see pitched by a breathless announcer stating all the reasons you can’t live without it.

He constructed a sturdy scratching post out of wood, carpet, adhesive and fine-grit sandpaper. He infused it with catnip to attract attention and encourage a little kneading/scratching activity.

And it became instantly obvious that the cats liked it and their needle-sharp claws were being dulled down. “They scratched like crazy,” he says.

He filed for a patent. And when he heard Everyday Edisons would be having its 2007 auditions in San Diego, not far from his home, he slung his invention under his arm and went to stand in line.

The judges were unanimous. He was fast-tracked into the kind of marketing research, expert attention, prototype modifications and retailer negotiations that most inventors only dream of. All at no charge to him.

The end result is a curved lounge-like product with a honeycombed surface that files down cats’ claws when they scratch or stretch.