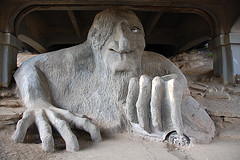 Just like in the fairy tale movies created by Disney, businesses also contain trolls that lurk under your bridges to other business adventures. These trolls can be seemingly harmless provided you don’t fall into their trap. However, if you slip and fall right into their hands, these trolls can prove to be quite detrimental to your business. So what types of trolls are we talking about here? Look below for the most common ones to avoid that I recently read about on Tim Berry’s Bplans.com.