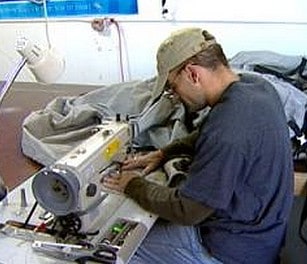 How many of us can truly say we found our life’s calling? Sewing found Johnny Wimberly as a teenager, long before he found this work as a small business owner, running Jed’s Custom Services in Sheridan, reports 9News.com.

In 1992, Wimberly was convicted of aggravated armed robbery and spent six years in prison.

“I went to prison basically with no skills,” Wimberly said.

Then he discovered sewing in an inmate training program which led to several jobs in prison and work after his release.

“I didn’t go try to get a job that had anything to do with banking or money, because most people, their first thought of talking to a felon is that they can’t be trusted,” Wimberly said.

Since 1992, he has much more: a loving wife who eventually helped him start his own business, and a daughter who helps run it.

Even during a credit squeeze when getting a loan is unheard of, Wimberly is no longer alone in this new struggle.

“Everything I have is in this company. I can’t imagine doing something without it. So what do you do? You quit and take a loss? Or do you just keep going and depend on your customers to come and bring you work?”