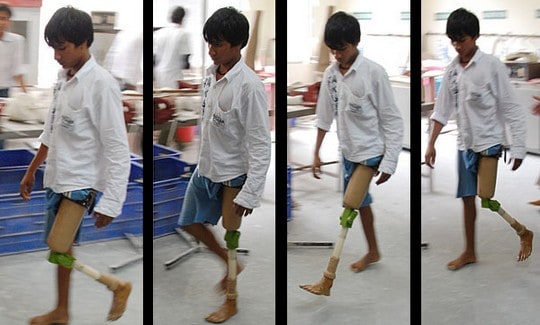 TIME’s picks for the best new gadgets and breakthrough ideas of the year, we’ll feature some of the ones we find interesting.

Tens of thousands of amputees in the developing world wear an inexpensive prosthetic called the Jaipur Foot. But poor patients who lose a knee joint have few options: a titanium replacement can cost $10,000, and crude models don’t work very well.

Now a team of Stanford engineering students has designed a knee that’s not only dirt cheap – just $20 – but also mimics the natural joint’s movements. Developed with the Jaipur Foot group, the JaipurKnee is made of self-lubricating, oil-filled nylon and is both flexible and stable, even on irregular terrain.

The device is being tested in India; more than 300 people have been fitted so far.

The Jaipur Knee comprises five pieces of plastic and four nuts and bolts. It requires no special tools and takes just a few hours to manufacture.