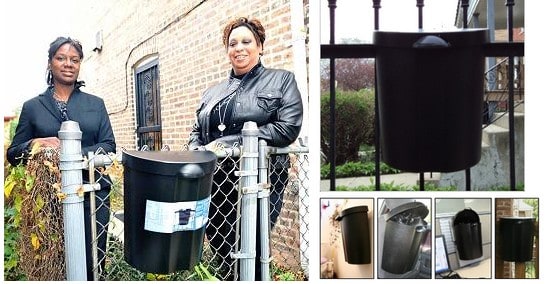 Deidre Booker works hard during the planting season tending her mums, pansies and marigolds in the front yard and a garden of herbs, tomatoes, cabbage and peppers in her backyard, writes The Sun Times

So when Booker heard about the “Glam Can” — a black, 3-gallon, mount-anywhere garbage and recycling can — she snapped one up to put on the fence next to her home in the Pill Hill neighborhood.

“It looks decorative, and it’s a convenient place to put the candy wrappers and debris that are forever drifting into the yard,” Booker said.

Twanda Mobley, CEO of Mobley’s Gate Garbage Inc., dreamed up the Glam Can while she worked as a bank compliance officer.

“I’m a homeowner, and it really bothered me to see litter all over people’s lawns,” said Mobley, who lives in Chicago Lawn.

After Mobley got laid off in a bank consolidation in March 2008, she started her own business to make her dream happen.