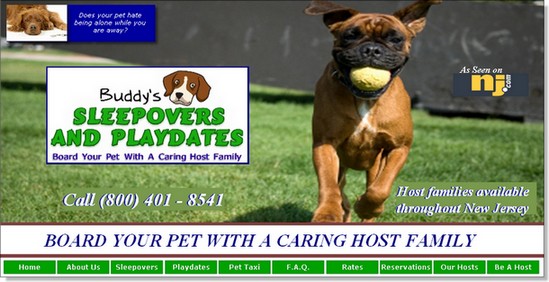 According to a story on NJ.com, after nearly an hour of farewell kisses, Estelle Dansky planted one last smooch on Kobe.

You be a good boy, okay?” the English teacher from Wanaque said as she placed her dog into waiting arms. “I’ll pick you up on Monday.”

The two women are hardly friends. They connected several months ago through Buddy’s Sleepovers and Playdates, a Marlboro company that is building a statewide network of host families to take in pets while their owners are away.

The company, run by Howard and Marilyn Beutel, began as an informal matchmaking service for local pet owners. But when Howard Beutel was laid off from his IT sales job in February, the couple decided to turn it into a full-time project. They launched a website and began advertising in vet clinics and online.

So far, the couple have recruited 80 host families — from Egg Harbor to Sparta — a mix of singles, families, retirees, past and current pet owners. They specialize in dogs, cats, parrots — and even ferrets.

The Beutels occupy a relatively untapped niche in a $54 billion industry that has remained insulated despite the recession, industry experts said. Pet spending has risen 6 percent over the previous year, according to the Packaged Facts, a market research business, and is expected to reach $71.3 billion by 2013.

Boarding is the second-biggest annual expense for dog owners, behind surgical vet visits and ahead of food costs, according to the American Pet Products Association.

Photo by Buddy’s Sleepovers and Playdates.