For many men, the holidays mean dreaded trips to crowded malls or outlet stores standing in lines to find that perfect gift for their significant other. 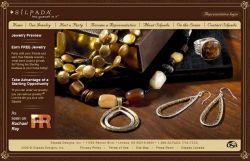 With that in mind, a Windsor entrepreneur decided to cut out the “middle man” and go directly to where the men are – the couch.

Sunday afternoon, Dawn Russell, 51, hosted a jewelry football party for her husband, Steve Russell, and his friends, combining it with the Denver Broncos versus Kansas City Chiefs football game.

Typically, jewelry and football are two words that don’t belong in the same sentence, but Dawn Russell, an independent Silpada Designs jewelry representative, realized the appeal of tangible shopping while watching football.

This is the third year the Russells have hosted the party, and both say while initially the guys are a bit skeptical, in the end, they are excited to be able to tell their wives they are going shopping and still get to watch the Broncos, too.

“During commercials, they can come over and look at the jewelry,” said Dawn Russell, who doesn’t give any sales pitch or pressure. “I’m just there to answer questions.”