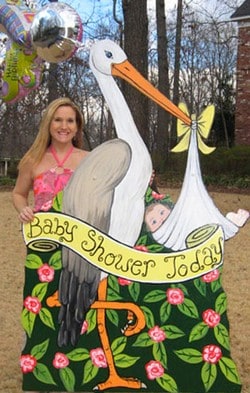 Not real storks, mind you. Rather, wooden or plastic stork signs alerting everyone that a baby’s just been born, reports WalletPop.

Amy Stone, 40, never dreamed she’d find herself involved in such a quirky niche market, especially after her career as an executive for Federal Express, but the Memphis, Tenn. resident needed to do something after her husband was laid off.

When Stone had her first daughter, her mother-in-law rented a stork to put in their front yard, but it looked hideous. “I told myself I would paint my own next time I had another baby, and I did just that with the birth of my second daughter,” says Stone, who had been an art major in college. “The stork was beautiful, and people told me I should start renting it out.”

After Stone’s husband lost his job, renting out the stork suddenly seemed like a great idea. She began a Web site, called RentStorkMemphis.com, and started creating more storks, hoping to snag a few customers. She also started sending customers some modeling clay, so they could make impressions of their child’s hands and feet and send them back to Stone, who would cast the impressions into a refrigerator magnet, Christmas tree ornament or other decoration.