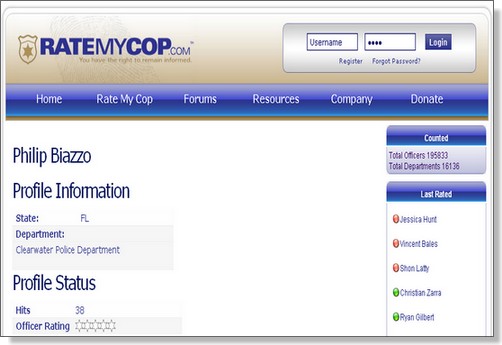 Remember the old days when only movies and restaurants were rated on the Internet?

The idea: Public servants should be able to take a little e-criticism too, right?

“We don’t take this kind of thing seriously and we don’t use it for internal affairs issues,” said Larry McKinnon, a Hillsborough County Sheriff’s Office spokesman. “We get hundreds of complaints and commendations a year on our own forms that we give to people in the community.”

Several of the 999 Tampa police officers listed on the site have negative reviews, but that doesn’t hold any credence with their department either.

“The Tampa Police Department does not use sites where the commenting is anonymous to rate the performances of our officers,” said department spokeswoman Andrea Davis.

The site was founded and launched Feb. 28, 2008, by Gino Sesto and his fiancee, Rebecca Costell.

The names of officers were provided to ratemycop.com by law enforcement agencies after the company sent public records requests. It lists officers from more than 500 agencies in 47 states.

Sesto said doesn’t include some names, such as undercover officers and others with sensitive jobs.

Users can log onto to ratemycop.com and search for specific officers by state or agency and then rate them in the categories of professionalism, fairness and satisfaction by giving the cop one to five stars. Reviewers can also share an anecdote or explain their rating with a post under the officer’s name.