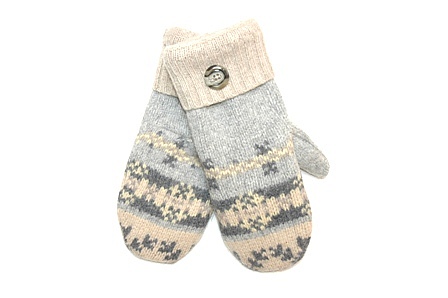 Sitting on the cream carpet of her Lee Street home, just a stone’s throw from the Brookline Reservoir, Megan Woods doesn’t look like the kind of mom who spends her afternoons sifting through ugly sweaters in the back of a thrift store.

But Woods has become a connoisseur of second-hand sweaters in the last year, able to select the best by knit and pattern so they can be cut into pieces, sewn back together and sold as top-dollar mittens selling at $65 a pair.

A stay-at-home mom with three kids in school, Woods decided to go into the mitten business a year ago, when her mother in northern Michigan sent her a pair of carefully crafted mittens for Christmas. With her youngest children headed for preschool, Woods was looking for a new project and convinced her mom to go into business.

But what started as a casual side project quickly became a full-time job for both women when representatives from Oprah Winfrey’s publishing company indicated an interest in featuring the mittens in this winter’s catalogue. The women, who had been doing a brisk business selling mittens at craft shows and to friends, suddenly had to prepare for a rush of orders across the country.

“It was really hard, because I had to work as if she was going to say yes, in terms of preparation, but fully knowing that she could say no,” said Woods.

Woods never cried when she was told Oprah was passing on the mittens. But she thought she might.

The mother-daughter team now finds itself more than ready for its first winter shopping season. They’ve launched a website, www.olivegreenapparel.com, have hundreds of mittens ready to ship, and are simply waiting for the orders to come piling in.

Even forgetting all the costs behind the mittens, Woods insists they’re still worth the price. Not only are the fleece-lined gloves warm and well crafted, Woods said, but each one is unique and unable to be duplicated because they’re based on the sweaters she happens upon in the thrift stores of Boston.