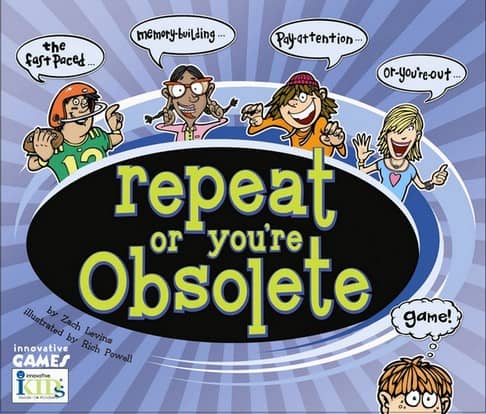 A funny thing happened to Zach Levins on the way to learning a new word a couple of years ago — he invented a board game that also reportedly boosts your memory, reports Inventors Digest.

A teacher introduced Zach, then 13, to the word “obsolete,” meaning no longer in general use or fallen into disuse.

He tumbled that word over in his head, tinkering with words that rhymed. He hit on “repeat,” which the dictionary tells us means to say or state something again.

From these intellectual gymnastics emerged the phrase “repeat or you’re obsolete.”

“I thought that would be a cool name for board game,” Zach, now 15, says. “I came up with the name before the concept of the game.”

Players make noises, act things out, create stories, make lists and generally play with words in this fast-paced, memory building, pay-attention-or-you’re-out game. One variation requires players to pantomime certain acts, adding elements to each act. If you forget an element, you lose a game piece.

The game, the first Zach has invented, is available through barnesandnoble.com and other online retailers.