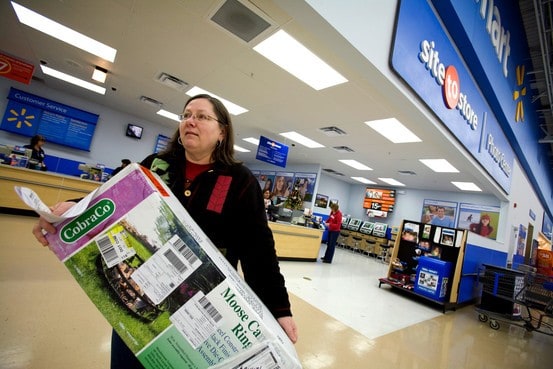 For almost a decade, Wal-Mart Stores Inc. has been boasting that it will dominate Internet retailing the way it dominates strip malls, toppling Amazon.com Inc. as the world’s largest online merchant, according to a story in The Wall Street Journal.

This holiday shopping season, Wal-Mart has started aiming at what it sees as Amazon’s Achilles’ heel: the costs and delays of shipping online purchases to buyers.

Customers who buy some of the more than 1.5 million products on Walmart.com can have them shipped free to a local Wal-Mart, where new service desks at the front of some stores make it easier for shoppers to retrieve their stuff. On the outskirts of Chicago, it is testing a radical new concept: a drive-through window, similar to those found at pharmacies and fast-food restaurants, where shoppers can pick up their Internet orders.

“There was a time when the online and offline businesses were viewed as being different,” said Walmart.com Chief Executive Raul Vazquez. “Now we are realizing that we actually have a physical advantage thanks to our thousands of stores, and we can use it to become No. 1 online.” Heading into Christmas, the company said 40% of its online orders are being delivered through stores.

Why Is Workwear Important These Days?