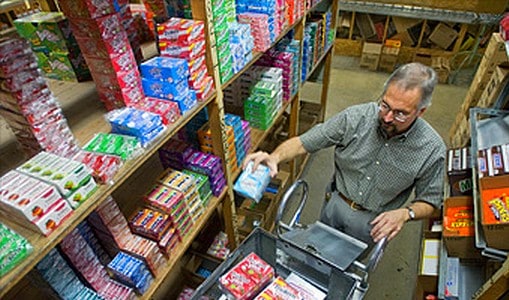 More than 45,000 businesses closed their doors for good in 2009 — including some that survived for longer than a century reports CNNMoney. Here’s a look at one.

On Christmas Eve, Mark Irvin closed the doors on a wholesale business that had been in his family for 125 years.

Irvin Candy Company Inc. started in 1884 as Triplett Irvin, which sold farm equipment and implements. It was named for Mark Irvin’s great-grandfather, George E. Irvin, and his partner, J.I. Triplet.

Over the years, the firm evolved into a tobacco and candy wholesale business that sold an assortment of products — everything from luggage to jewelry to fishing gear — to mom-and-pop convenience stores in Northern Virginia.

“It was a very difficult decision to make,” Mark Irvin said of the company’s closure, which came after the recession forced many of the small businesses he serviced to shut down.

“I made 1,000 deliveries a week 25 years ago,” he said. By the company’s final days, that number had been cut in half. “The customer base had all but eroded.”

There were other factors at work, too. It became harder for a small wholesale business to purchase products in bulk from large manufacturing companies. The uncertainty about small-business tax changes as the Obama administration considers health care reform also played a role, he said. In the end, Irvin decided to pull the plug on the family business before it deteriorated further.