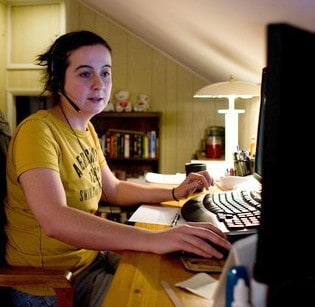 Amid the economy’s many ailments, some good news has remained mostly off the radar: The at-home work force is growing, and it is encompassing new occupations ranging from radiology and nursing to auditing and teaching, according to a story in The Wall Street Journal.

The bad news: Fierce competition means your odds of landing one of these jobs are poor. And if you succeed, you will probably take a pay cut.

For companies, home-based employees, independent contractors and freelancers are helping cut costs and improve customer service. Full-time, home-based freelancers and independent contractors in the U.S. are expected to increase by 200,000 workers to 11 million by the end of 2009, says Ray Boggs, a vice president of IDC, Framingham, Mass., a market-research firm; he sees another 200,000-worker increase in 2010.

While that is a mere blip on the radar in an economy that has been losing nearly that many jobs in a month, the trend means a lot to the individuals who are benefiting from it. They are avoiding dreaded commutes, doing volunteer work, pursuing college degrees or caring for family. And they are performing increasingly complex tasks from home, from reading MRIs to helping clients search for Bigfoot, the mythic wilderness monster.

Photo by The Wall Street Journal.