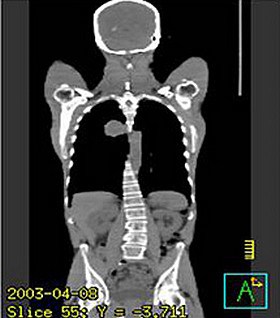 Greg Colip had a comfortable life as a Houston attorney specializing in the oil-and-gas industry. He never thought he’d become an expert in cancer screening.

That changed when a friend arranged a quick chat with Jerry Bryant, a local scientist, in a hotel lobby. That led to the creation of Cell>Point, a company that plans to deliver a cheaper and more effective way to detect tumors in 2010, reports Fortune Small Business.

Doctors rely on positron-emission tomography (PET) scans to see tumors. But PET machines cost more than $2.5 million apiece and are usually found only in major medical centers. Bryant’s employer, MD Anderson Cancer Center in Houston, had developed a chemical that could light up a tumor on a common SPECT (single photon emission computed tomography) camera. He wanted Colip, 62, a pharmaceutical industry veteran, to help turn it into a product.

SPECT cameras are used for bone scans and cardiac imaging. More affordable at $800,000 or less, they are found in six times as many U.S. hospitals as PET scanners. Better yet, Cell>Point’s isotope uses 70% less radiation than PET isotopes and should cost about half as much — about $800 per scan. Colip says doctors using his SPECT system have found tumors as small as 2 millimeters — about the size of the top of a hatpin. That tells them more reliably whether the tumors are malignant, saving unnecessary biopsies and surgeries. (Around 40% of PET scans give a false-positive diagnosis.)

Another bonus: Doctors could determine earlier whether a cancer treatment was working — within about two weeks, instead of up to five months with PET scans.