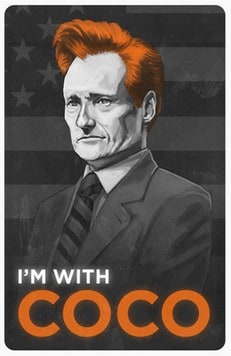 Out of luck and out of jobs as the nation slowly tries to emerge from a recession, many Americans are finding in Conan O’Brien what they can’t find elsewhere — dignity in telling The Man to take a hike.

WalletPop reports in O’Brien’s fight to keep his job as host of “The Tonight Show” and its coveted 11:35 p.m. time slot on NBC, many workers are finding common ground in O’Brien’s quest to live the American dream by working hard, only to have some dimwitted boss try to away from under him by bringing back the old hire.

Anyone who has ever been laid off, been fired or had their talent underappreciated in an annual review knows what the redhead with the nickname Coco is going through.

O’Brien’s open letter to “People of Earth” has an everyman ring to it. “My hope is that NBC and I can resolve this quickly so that my staff, crew, and I can do a show we can be proud of, for a company that values our work,” he writes.

Other than a fair wage, that’s what most employees want — to have their work valued. Being called “chicken-hearted and gutless,” as NBC executive Dick Ebersol did of O’Brien, doesn’t help, either.